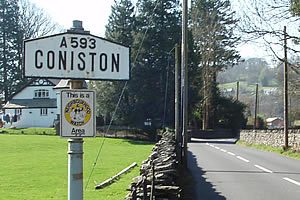 The village of Coniston lies at the southern end of the Lake District National Park to the west of Windermere and on the north-west shore of Coniston Water.  On arrival at his beautiful Lakeland village take a look at the scenery – it’s impossible not to be amazed by the impressive Coniston Old Man towering over the village! This Lake District fell has several well-marked paths to the 803m summit and is really popular with walkers. 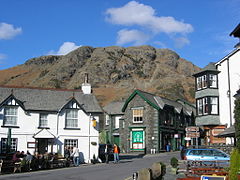 The village was once the hub of farming & mining in the area but now is mainly devoted to tourism with places to eat, pubs, cafes & shops but still keeping its quaint Lake District charm. Visit the  Ruskin Museum in the village to find out about Coniston’s heritage with interesting exhibitions celebrating John Ruskin, Donald Campbell, Swallows & Amazons, Coniston’s Coppermines & also Herdwick sheep. 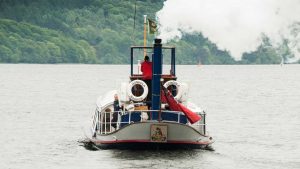 To reach Coniston Water enjoy the half a mile stroll from Coniston village to lake shore. Here you can hire all manner of boats at Coniston Boating Centre , enjoy a snack at The Bluebird Café or take a relaxing cruise on Coniston’s Steam Yacht Gondola. It is so peaceful out on the lake it is difficult to imagine the time back in the 50’s when Donald Campbell chose to use Coniston Water to beat the world water speed record. He succeeded several times until his tragic accident in 1967 when his jet boat, “Bluebird K7”, crashed at 290 mph.  But that’s not quite the end of his story… 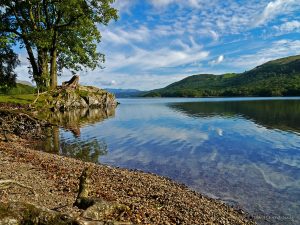 John Ruskin, famous poet & art critic bought his home at Brantwood on the eastern shore of Coniston Water in 1871. Now open to the public you can wander round the rooms and see how Ruskin lived surrounded by wonderful artwork and the view’s not bad either!